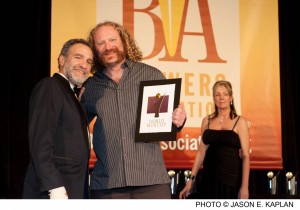 CHICAGO, IL – The Dillon Dam Brewery is ecstatic over its Gold Medal at the World Beer Cup for its McLuhr’s Irish Stout which won in the Classic Irish-Style Dry Stout Category beating out 22 entries from  all over the world.

The Dam Brewery was the only Summit County brewery to win a medal.  Colorado breweries won 11 medals.  This is the third medal the Dam Brewery has won at the World Beer Cup.  The Sweet George’s Brown Ale won a Gold in 2002 and a Silver in 2008.

The eighth bi-annual competition announced awards to brewers from 19 countries ranging from Australia and Italy to Iceland and Japan.

For more info about the world beer cup go to:  http://www.worldbeercup.org/.