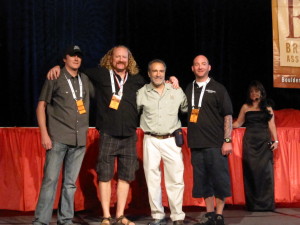 McLuhr’s Irish Stout won a silver medal in the Classic Irish-Style Stout category at the GABF held on Sat. Sept. 18, 2010.

The Dam had all but given up its hopes for a medal until category 71 out of 79  was announced.  After all,  519 breweries submitted 3,601 beers for judging.  It is really difficult to win a medal.   The sad faces of the brewmasters who went away empty handed was heart wrenching.