Pumpkin Beer is going in the brew kettle… 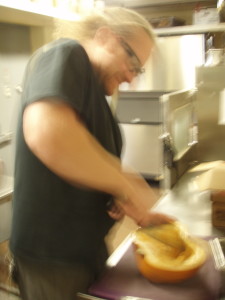 Hello Pumpkin heads!  We are brewing our traditional batch of pumpkin beer today!  Cory is cranking up another batch of Great Pumpkin Ale (clever name no?) It is a light amber ale with a touch of Victory & Cara Brown malts giving almost a hint of graham  cracker like crust flavors.  There are four roasted pumpkins, see photo of Cory prepping pumpkins, along with pumpkin pie spice, assorted other spices, vanilla bean and just a touch of sugar.  Cory hopes to tap the Great Pumpkin Ale on Thanksgiving weekend.  Watch for a tweet from Cory when it is close.